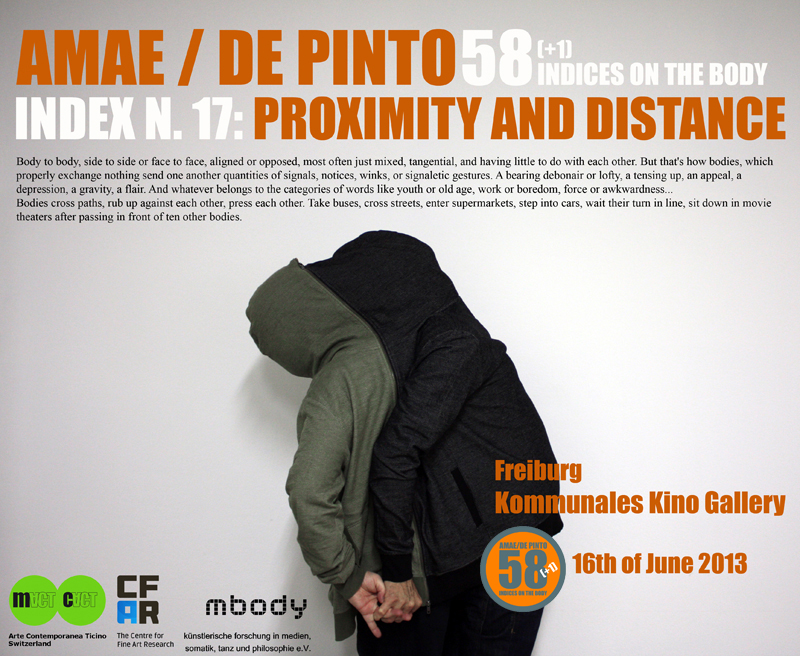 58 (+1) INDICES ON THE BODY
Emulation as mimicry of transit within performance art. Empathy and conflict between identity and otherness.
https://58indicesonthebody.wordpress.com/

On the occasion of the meeting with the philosopher Jean-Luc Nancy, the philosopher, psychosomatic doctor, psychotherapist Martin Dornberg and the students of the Albert-Ludwigs-Universität in Freiburg.

The themes preferred by the collective Amae and by De Pinto such as transience, transfer, otherness, virtuality, Queer Theory will be the very soul of the project, which it will take charge of a method of creative presentation leading into a series of 58 (plus one) performances. The performances will focus on the idea of body from the physical, philosophical, biological, psychological, emotional, social, educational, economical and cultural point of view.
Amae and De Pinto will literally fuse their bodies, not only to demonstrate the occupied/achieved contiguity/interruption by each body, but in order to bring to life a body/corpus unicum: here the physical, philosophical and psychological extension of the body in action will find its shape. These will be bodies put into a condition of mutation and transience: a technological, biological and political introduction will allow:

The long series of performances will cause the active visitor to be themselves author of those thoughts, of those actions and integrate them all.

During 58 (+1) INDICES ON THE BODY the body Amae/De Pinto will put the public into a condition of active interaction with the performers through the use of technologies and softwares that were originally created for commercial and/or scientific purposes and now exploited for a brand new artistic practice. Among them we remind: QR codes, as viral diffuser of messages, texts, animations and videos. The use of video and audio-interactive installations, as well as softwares for augmented reality.

The project is part of Ivan Lupi’s studies. The proposal for his research took its shape in twelve years of artistic practice (as a member of the AMAE collective of artists) internationally developed within collaborations (Rome, Detroit, Barcelona, Hong Kong, London, Bellinzona) investigating the body trough ongoing projects, public and online performances and commissioned installations.
His MA in Queer Theory Arts and Culture explored the Foucaultian notion of “Technology for the care of the self” in relation to self-performing, self-fashioning and self-harming of queer bodies versus themselves or an audience both physical or virtual. (Butler-Halperin-Jones).
This opened several questions on the relation between the audience’s body and the performer’s and how the audience could critically engage with performance art in current times of augmented reality. This application for a PhD program with Prof. S. Golding has the aim to take these questions further proposing a method that gives priority to the practice of performance art from which theoretical support on the notions above will be developed in second instance.

WHO (WHAT) IS AMAE
Amae's research contaminates traditional languages of art communication, such as poetry, video, sound, photography, installation, performance, with mass media and makes an attempt on cultural and social stereotypes. As well as photographic works and performances which are often broadcast live on the web, since 2002 Amae has stood out internationally in the video and performance domain: Videoakt Loop09 (Barcelona, 2009); Hackney Wicked Festival (London, 2007); The Eyes Are the Objects (Hong Kong, 2005); M.O.N.A. International Video Festival (Detroit, 2005), performances and poetry. MACT/CACT Arte Contemporanea Ticino, Switzerland (2013).

AMAE’s research recently approached Queer Theory with a group of works developed with the support of Birmingham City University. The works explore the theory of the Self, the perception of sexuality and the therapeutic influence of art in the construction of identity.

WHO IS PIER GIORGIO DE PINTO
1968, Born in Italy, lives & works between Bellinzona (CH), Basel (CH) and Florence (I). He is a trans-disciplinary artist,  performer,  curator,  theorist and media trainer.
De Pinto strongly uses new media as a “thinking medium” in which he involves the audience, creating performative experiences and immersive environments. His projects usually focus on collaborations with other authors, like musicians, choreographers and artists from different cultural backgrounds, styles and identity genres.
These collaborations enable De Pinto to undertake new and radical experimental projects, capable of stimulating discussion about stereotypes and prejudices, asking awkward questions in the areas of culture, politics and religion.

Studies & Trainings
After having taken his vocational school diploma in Florence, he went on studying and taking part in courses, workshops and seminars, carrying on a steadfast study of contemporary culture languages: from the study of plastic arts, of videos, of computer graphics & digital art and photography, to the study of body considered as a performative element, taking courses in oriental disciplines, in communication, form and behavioural relationship and undergoing training sessions in dubbing and acting at a School of Cinema and a School of Theatre.

Recently, he took part to a workshop in Spatial Data Art, Urban computing, Geo-Mapping, Social patterns with Prof. Mauro Martino of MIT in Boston (Barabási Lab at Center for Complex Network Research; Harvard University, Boston) in collaboration with i2A International Institute of Architecture, Vico Morcote (CH).
He attended in November 2011 a Course in Fundraising with Brainard Carey, Co-founder and Director of The Artworld Demystified in New York.
De Pinto speaks fluently Italian and English. He has a good knowledge of French and currently he is attending a German course. 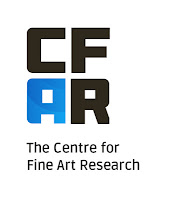