The fifth edition of the Italian art fair dedicated to photography is ready to open its doors to the 145 exhibitors expected in the new location at Porta Nuova Varesine.
In homage to Expo 2015, we are pleased to present a section on the main themes suggested by EXPO 2015.

145 booths set up with great curatorial care, two purchase awards, a broad cultural programme that includes a presentation of some great European photography festivals and specific talks inspired by the 100th anniversary of the birth of Roland Barthes; an exhibition dedicated to the invaluable photographic archives of Giuseppe Pellizza da Volpedo and a special exhibition on artist’s book; the debut of the performance, the now traditional scouting occasions conducted by international personalities, the round table on the legal aspects that affect the world of the image. This year sees the richest and most wide-ranging edition of MIA Fair, the photography art fair conceived and directed by Fabio Castelli, which celebrates its fifth edition at The Mall, in Milan, from 11th to 13th April.

THE FAIR – MIA Fair lands at the renewed district of Porta Nuova Varesine, a symbol of the forward-looking Milan. The Mall, a multi-functional centre nestled among the skyscrapers that have changed the city skyline, has been chosen to welcome the 145 exhibitors of the 2015 edition, with more than twenty artists in the section MIA Proposal, a unique occasion for galleries to discover new talents, and a dozen or so photography publishers from Italy and abroad. In addition to the previous years formula by which each gallery exhibits exclusively the works of one artist per booth, the Fair also focuses on the theme of EXPO 2015, for which galleries are invited to present a group show inspired by the following main themes: “Production and Planet”, “Feeding”, “Women&Expo and “Education: nourish knowledge to feed the planet”.

CULTURAL PROGRAMME – La chambre claire, the extraordinary essay by Roland Barthes is the starting point and the main topic of a series of conferences organized during MIA Fair opening days.
An investigation on the image as it is perceived and experienced in contemporary life, in that tension between reality and pretence, filtered through the mass media, which Roland Barthes analysed with such extraordinary lucidity and incredible perspicacity (this was in 1980) in his La chambre claire. It is precisely this fundamental text, on the 100th anniversary of the birth of the French intellectual, that provides stimulus and comparison for the programme schedule devised by writer and essayist Gianluigi Ricuperati, cross disciplinary curator at MIA Fair and one of the most promising intellectuals of the Italian new generation, who proposes a rich calendar of meetings, debates and in-depth analyses.
MIA Fair cultural programme will also welcome interesting foreign projects in photography, such as  the creators of some of the most important festivals of Europe who will bring to the Fair their ideas, experiences and visions: Oliva Maria Rubio, artistic director of PhotoEspaña Madrid, and Krzysztof Candrowicz, founder of the International Festival of Photography in Lodz, artistic director of the Triennial of Hamburg and creator of the PhotoFestival Union network. To celebrate the first thirty years of the Musée de l’Elysée in Lausanne, one of the most important institutions in the world dealing exclusively with photography, MIA Fair will host the museum’s director, Tatyana Franck. Lastly, the heads of the MoRE Museum, a virtual museum preserving the memory of artistic projects that has never been completed will present a virtual catalogue of unrealised photographs.
Cristina Manasse is a lawyer specialized in art law and intellectual property and Joe Baio is an American art collector and lawyer. Starting with the Morel vs. AFP/Getty Images case, they will discuss some of the most famous cases of use and misappropriation of images, as well as the effect of selfies, social networks and privacy on photographic world.

PARTNERS – For the fourth consecutive year BNL BNP PARIBAS Group is the event’s Main Sponsor, confirming its interest for the development of contemporary art in Italy.
After the success of the past editions, the Bank once again will assign the “BNL BNP Paribas Group Award” to the best artist, selected by a qualified jury, among those showing their works by galleries.
The selected artwork will be acquired by the Group and will enhance the artistic heritage of the Bank which, to date, has approx. 5'000. works. Among these there are masterpieces of classical and modern art, as well as works by young contemporary talents included "NIAD, The small Crater, 2000" realized by Ohad Matalon, "Paesaggio #7" by Luigi Erba and Roberto Bernè and the work "Untitled" by Luca Gilli, winners respectively of the first, second and third “BNL BNP Paribas Group Award”.

Official Partner of MIA Fair since the first edition, in 2015 Lavazza confirms its support as Main Sponsor. Next April, MIA Fair visitors will be welcomed by the Caffè Artistico Lavazza, a unique space enriched by the exhibition of the Dutch duo Exactitudes, composed of the artists Ari Versluis and Ellie Utyttenbroek. Lavazza thus reaffirms its inseparable link with fine art photography, a universal language that represents the Company’s identity in the world, with its calendars and advertising campaigns created by the best-known artists in contemporary photography.

My LifeStyle – a brand which embodies a new concept of living in the real estate industry – chooses MIA Fair for making its debut and for showing its innovative real estate projects: Pomaseiuno and Maestri Campionesi 16. MIA Fair will be the occasion for launching the project of supporting and enhancing the value of emerging artists in the field of contemporary art through the My LifeStyle Award, dedicated to talents participating in the MIA Proposal section. Three works will be selected by the Jury and displayed in the My LifeStyle’s booth, but the final winning artwork will be chosen by MIA Fair public through a shared selection process and acquired by My LifeStyle.

EXHIBITIONS – MIA Fair proposes two in-depth analyses accompanied by ad hoc exhibitions. One is a focus on the artist book, from the ‘70s up to today, featuring a selection of projects by artists including Olivo Barbieri, Luigi Ghirri, Paolo Gioli, Francesco Jodice, Nino Migliori, Franco Vaccari and Italo Zannier.
The other is a study on a 19th Century Italian artist who, more than any other, recognised and adopted the potential of the brand new art of photography as a tool for enriching his painting: Giuseppe Pellizza da Volpedo. The special edition of the ‘Tempo ritrovato – fotografie da non perdere’ Archives Award promoted by Eberhard & Co. and Io Donna will be hosting the exhibition ‘Pellizza da Volpedo and Photography’ featuring works from the Pellizza da Volpedo archive. Right from its first editions, the Award has introduced an important new aspect to photography competitions: that of bringing out into the light works created in the past, overriding the custom of orienting the awarding to works in progress or contemporary projects. The first and second editions of the Award, which focuses on the private archives of Italian artists who have carried out important work in all the forms of photographic language, were dedicated to the 50s and 60s respectively, and awarded the archives of Federico Garolla and Tranquillo Casiraghi. On the occasion of EXPO 2015, Eberhard & Co. and Io Donna will be celebrating one of the works identified as being iconic of the Universal Exposition – the Quarto Stato, which is housed in the Museo del Novecento of Milan; the competition dedicated to the archives of the 70s is thus postponed to MIA Fair 2016 edition. On show a rich collection of original prints that are today preserved in the archive of the artist, an invaluable legacy that has recently been restored and enhanced. The exhibition bears witness, on one hand, to the versatility and curiosity of the author of the Quarto Stato, and on the other hand to the dual nature of photography: a tool of art if not art itself.

PERFORMANCE – Making its debut in Italy, within the scope of MIA Fair, is the project Economic Body, a performance conceived and directed by Swedish choreographer Anna-mi Fredriksson for the Fluxum Foundation from Geneva. The performance represents an original attempt to portray social sciences through forms of participatory art, such as dance. It creates a non-verbal language that involves the audience in the sharing of concepts relating to subjects such as economy, politics and demography, which are often perceived as heavy, even impenetrable to the general public, making them accessible and immediate through the freshness of art.

CODICE MIA – MIA Fair continues to look to the future through CODICE MIA, a project conceived by Enrica Viganò as a highly original form of portfolio review. The artists selected by the Jury will have the opportunity to discuss their own works with:

The jury will award the best portfolio and the winner will have the chance to exhibit at MIA Fair 2016 edition. 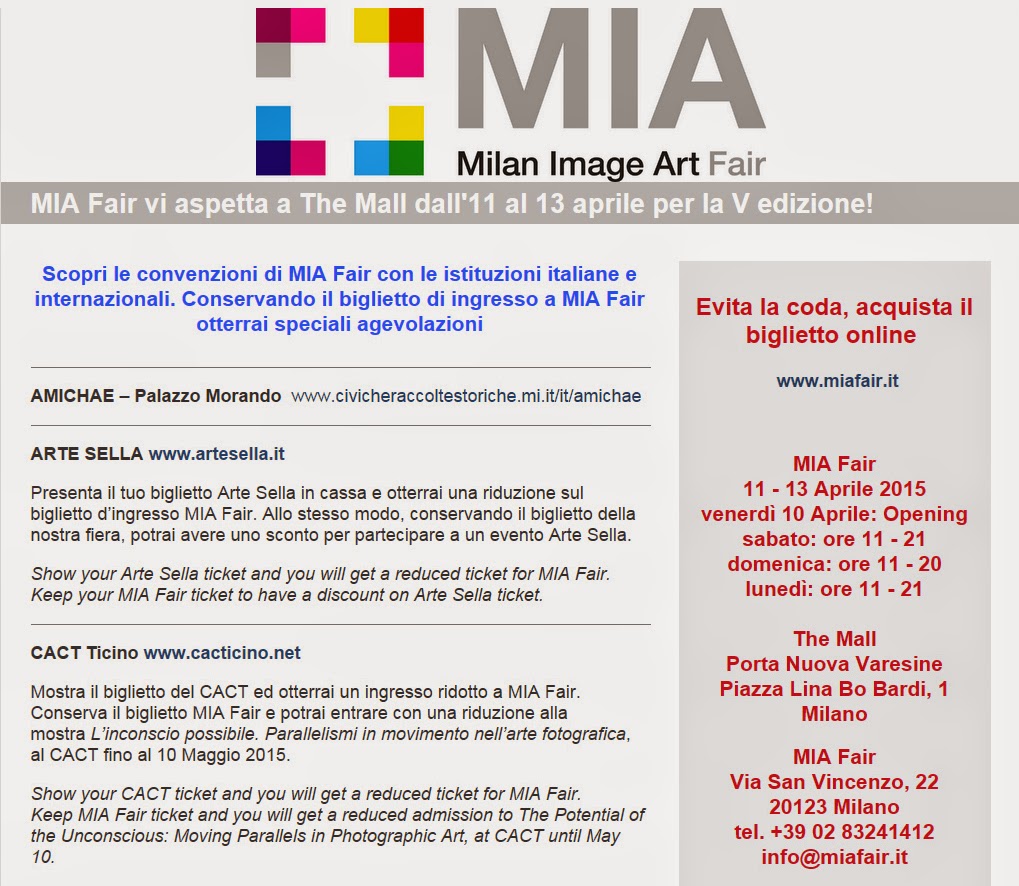 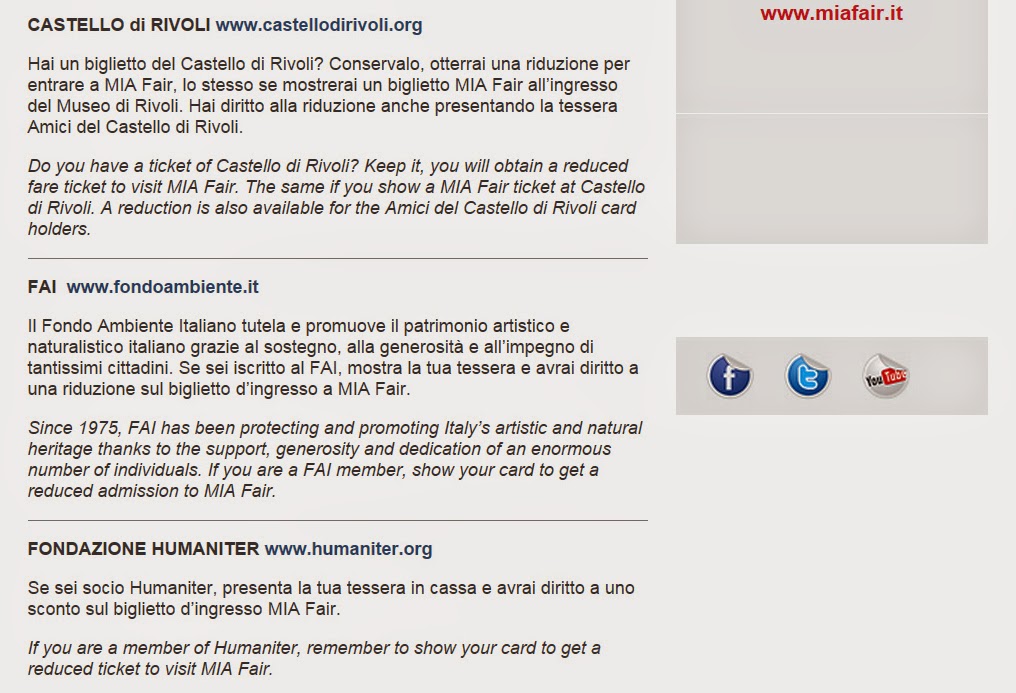 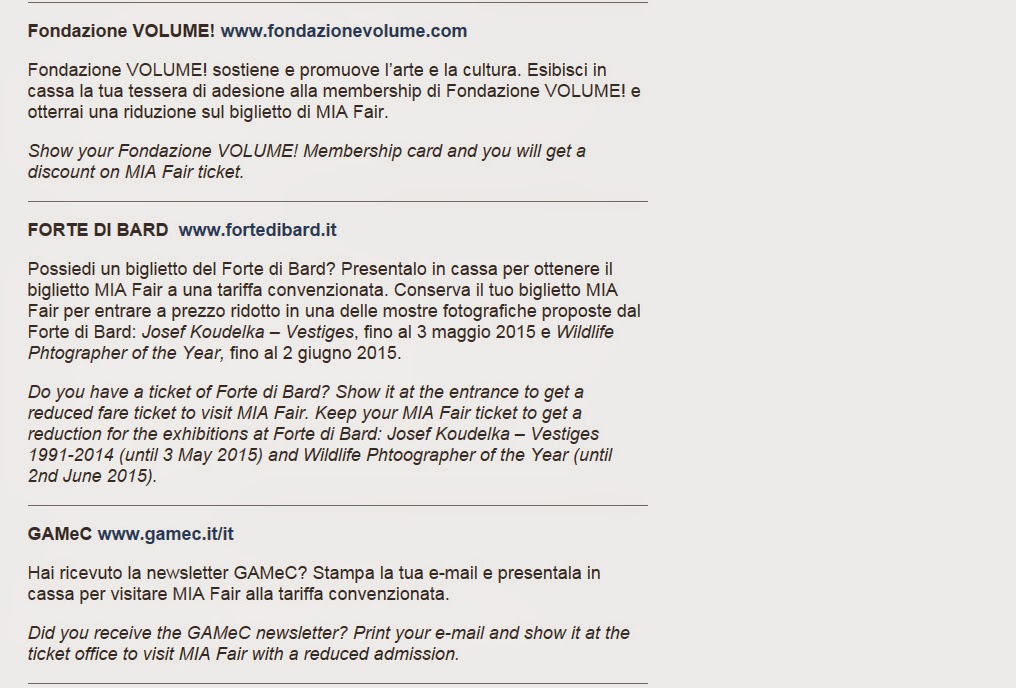 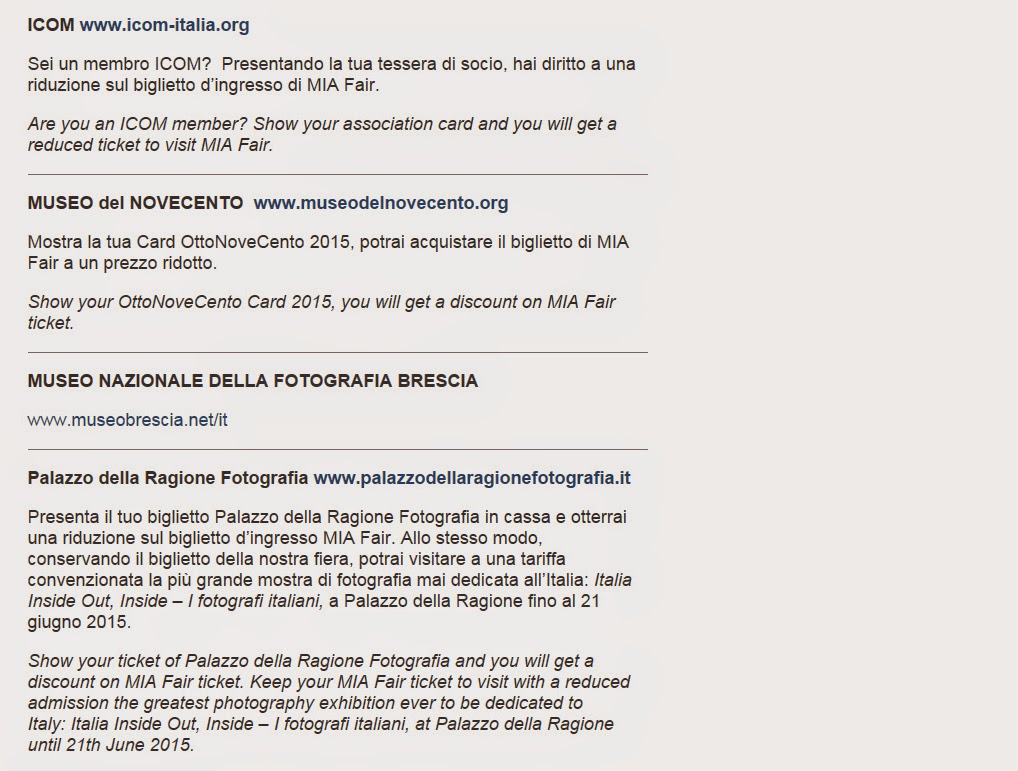 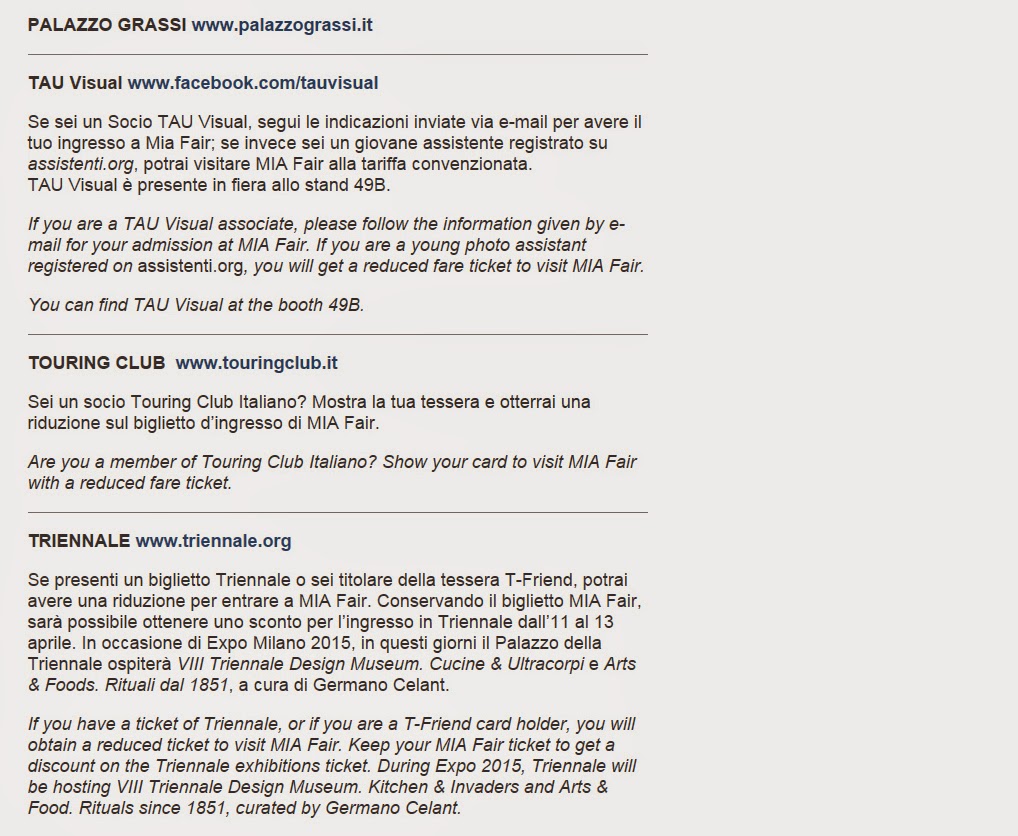 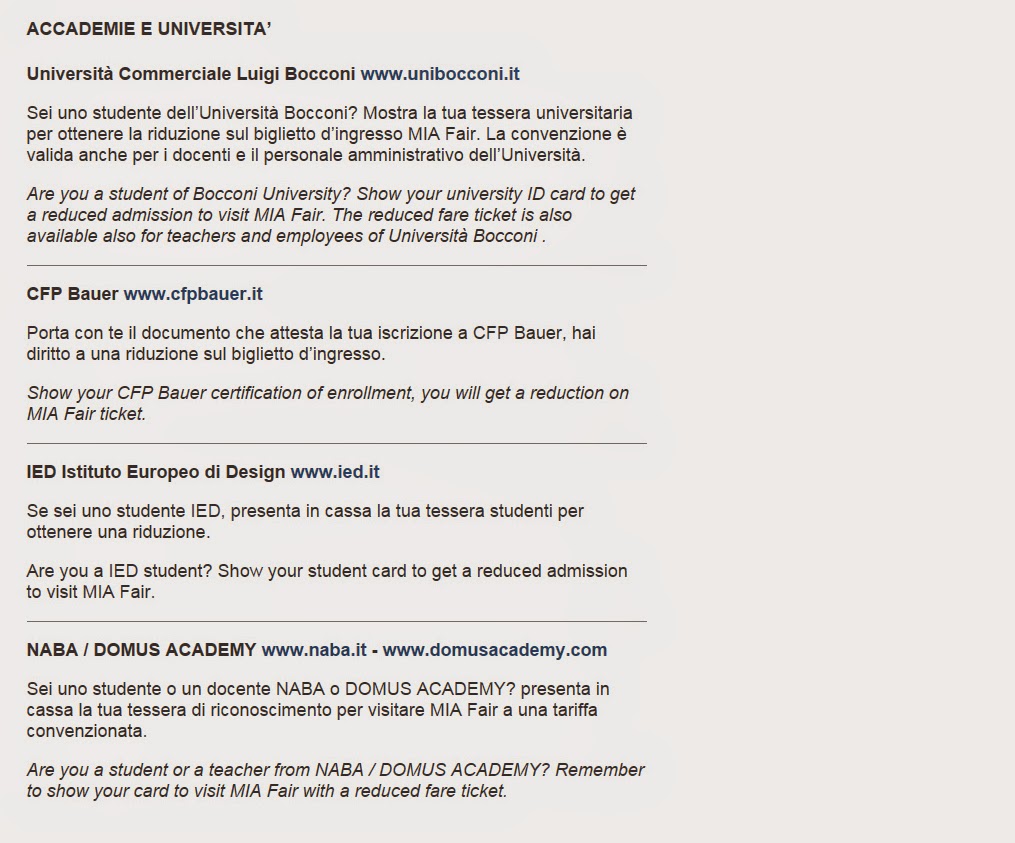