Scroll down for the photographic documentation of the workshop


Referring to the Workshop and Performance entitled C.O.R.E Strange foreign bodies by AMAE/DE PINTO, which will take place at MACT/CACT the 24th and 25th of May 2014, many people sent their application and therefore we thank you a lot for your warm participation. Due to the important number of subscriptions, AMAE/ DE PINTO now decided to admit 10 people, instead of 8 as we officially previously announced.

We’re also pleased to inform that philosopher Jean-Luc Nancy will be with us via streaming. This will allow the participants to get in touch with him directly in real time.

Here is the list of the selected participants to the workshop and performance:

We express our thankfulness to all subscribers, who took their time to send their written information and motivations. Thank you! 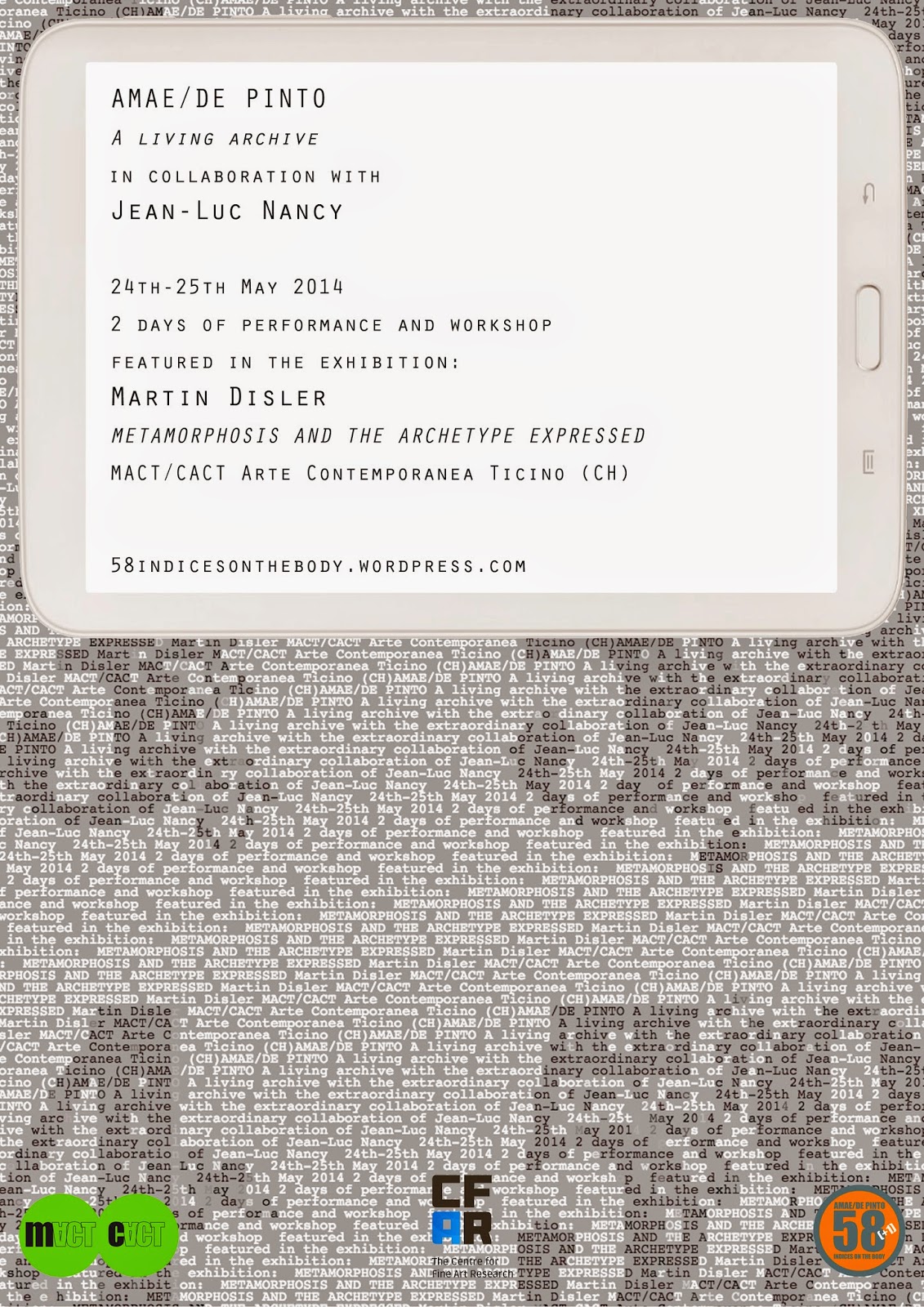 INFORMATIONS AND SUBSCRIPTIONS
piergiorgio.depinto@cacticino.net deadline 12 May 2014
Official communication of the 8 selected participants: 14 May 2014

Participation in the workshop is free of charge - no specific training or education is required.
Lunch and coffee breaks are offered by MACT/CACT Contemporary Art in Canton Ticino.

The Workshop will be held in Italian with a possible simultaneous translation in English.

framework, motivations and objectives
Jean-Luc Nancy’s notions of body and soul gave us more questions than answers. In addition to this, while contemplating the artworks of the neo-expressionist painter Martin Disler (1949-1996), we completely abandoned our ideas about the body - in order to find the body again from other perspectives and via other bodies, foreign and strange.
The artistic collaboration between Amae/De Pinto, intends to pay homage to Disler/Nancy’s artistic/philosophical research with a choral performance investigating the topics that gave the structure to the works of these two great authors during their lives. The workshop aims to provide the participants with the necessary conditions for an active critical approach to the relationship between body and soul by making such notions physical and tangible, tactile and sensory. If this experiment succeeds through the final performance it will confirm that little is known about these topics.
The workshop will last one day and will be divided into different moments between different philosophical approaches (hearing and viewing) with a few moments of practice and action (performance).
The workshop will mainly focus on both the fundamental: Jean-Luc Nancy’s 58 indices sur le corps/Extension de l’âme (58 indices on the body/extension of the soul), as well as the observation and interpretation of Disler’s paintings exhibited within the show at MACT/CACT. Disler’s pieces will represent the pivot point for the final performance. During the workshop the participants will be involved in both group and individual activities in order to provide everyone with the necessary instruments to take active part within the final performance Index 58. C.O.R.E Strange foreign bodies.
The participants will be asked to express themselves by creating actions and objects that examine the notion of “soul”.

Programme of the workshop and the development of its four fundamental topics
10:00 - Greetings.
10:15 - Introduction – who we are/who you are.

To Organise
14:10 - Everyone chooses their own index. Brainstorming: choice and motivation.
15:00 - Coffee break.

To Rationalise
15:40 - Final re-collection: the elements of our own soul.

To Enunciate
15:50 - Free the voice of one’s own soul. This is my story: Indice ”xx”.
16:00 - In situ rehearsal – Taking the habit of the souls, waiting.
17:00 - Conclusion – Expectations and Thanks (projection of a short film).
17:20 - Final decision of the places for the performance located in the three exhibition rooms of MACT/CACT.
17:40 - Coffee Break – Free time and relax in the garden until the beginning of the performance.
18:30 - The audience and us. The performance Index 58. C.O.R.E Strange foreign bodies begins.
19:30 - The end of the performance.

the facilitators
AMAE Art Collective. AMAEʼs research contaminates traditional languages of art communication (poetry, video, sound, photography, installation, performance) with mass media via photographic works and performances, which are often broadcast live on the web.
AMAEʼs research recently approached queer theory with a group of works developed with the support of Birmingham City University. The works explore the theory of the self, the perception of sexuality and the therapeutic influence of art in the construction of identity.

Pier Giorgio De Pinto is a trans-disciplinary artist, curator, theorist and media trainer.
De Pinto concentrates on new media in which he involves the audience, creating performative experiences and immersive environments. Mapping the body as personal genius loci (spirit of the place) referenced to a clearly identifiable psycho-geography is one of the topics on which the artist is working, while drawing thematic inspiration from the television and cinema scene, as well as from the social environment.

Martin Disler (1949-1996) is a Swiss painter, a sculptor and a writer. He moved to Germany where he joined the Neue Wilden group of painters who would practise a new expressionist style inspired from Northern European culture. In the 1970s and 1980s, Disler worked in numerous cities in Europe and the USA.
In 1982, he exhibited works at the Documenta 7. In Italy his works are shown during the Venice Biennale of 1984. After two years a big solo exhibition at Kunstmuseum Basel. Between 1989 and 1991 he produced a series of 66 bronze sculptures entitled Häutung und Tanz (The Shedding of Skin and Dance), the biggest set of works later exhibited at the Whitechapel Gallery in London, Kunsthalle Basel, Lenbachhaus München, and at the Wilhelm-Lehmbruck Museum, Duisburg. The 66 anthropomorphic sculptures were created at his studio in Lugano (Ticino) assisted by Giorgio Staro. The last major exhibition of Häutung und Tanz (The Shedding of Skin and Dance) took place in 1994 at Castelgrande in Bellinzona, and at CACT Centre for Contemporary Art in Ticino with a mural entitled Wie Vögel auf toten Bäume" (Like birds on dead trees), both exhibitions curated by Mario Casanova.

Jean-Luc Nancy is a French philosopher emeritus of philosophy at the University of Strasbourg. Along with Derrida (who dedicated to Nancy a large number of studies) can be considered one of the greatest specialists of deconstructionism. His thought is articulated on different levels from the more political perspective to the wider field of arts and aesthetics (relevant is his text The Muse). His books generate much interest often with strong autobiographical references as ‘Corpus’, which contains the text ‘The intruder’, strong and emotional reflection on his heart transplant. He has collaborated with numerous artists like Claudio Parmeggiani, Claire Denis, Mathilde Monnier, Abbas Kiarostami, Simon Hantai. Recently Mr Nancy also curated the exhibition L’altro ritratto (The other portrait) at MART Art Museum in Rovereto, Italy. Over the past two years, the encounter with Pier Giorgio De Pinto and the collective AMAE for their project 58 (+1) Indices on the body stimulated Jean-Luc Nancy to revise his text 58 Indices sur le corps, by expanding it and implementing four new "indices" specifically created for this project. At the same time, for the first time, he recorded his voice reading all his "Indices". Some of these recordings will be performed in streaming or live during events and/or exhibitions with AMAE / DE PINTO among others during the Festival INACT in Strasbourg in May 2014 and the event The Voice and the Lens at the Whitechapel Gallery in London, United Kingdom in June 2014. 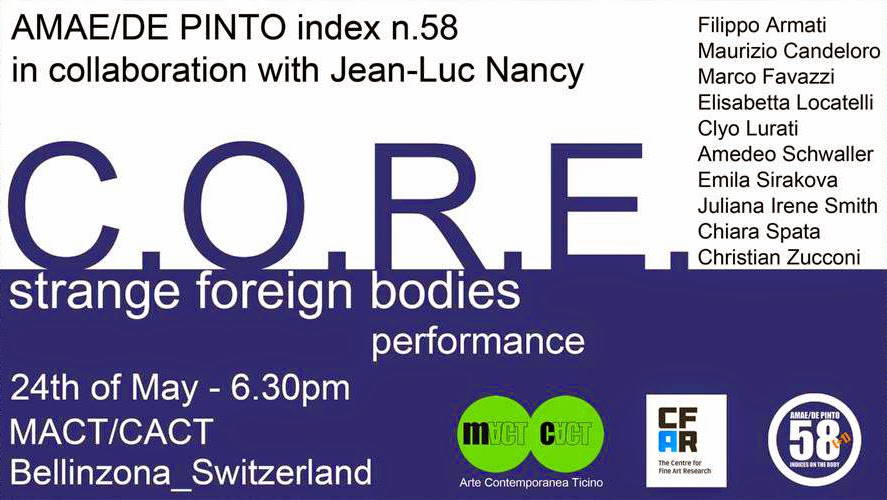 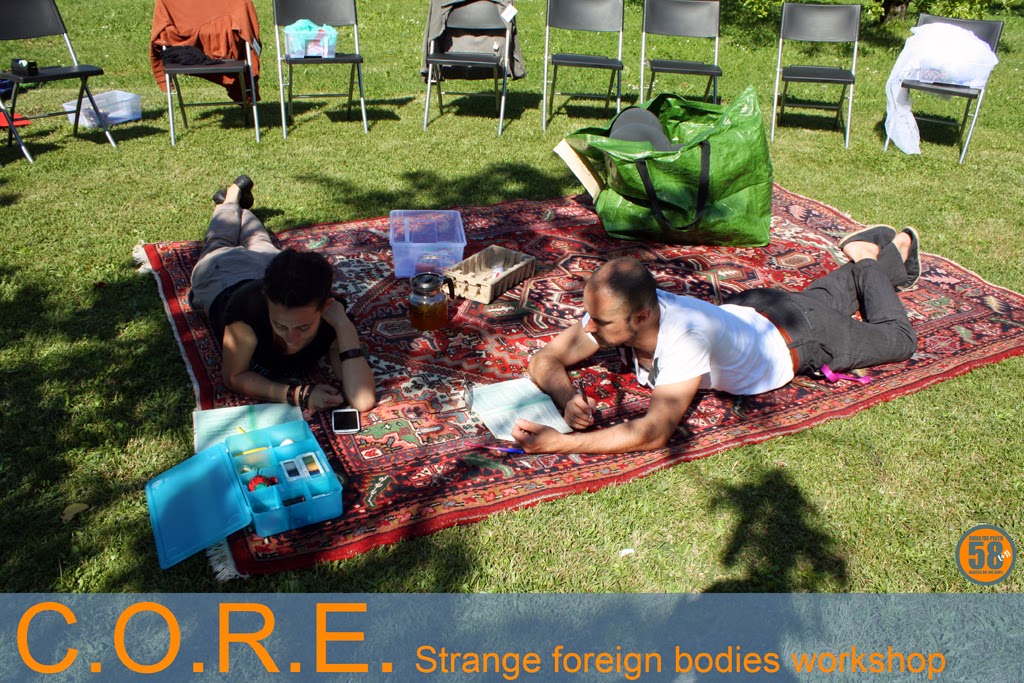 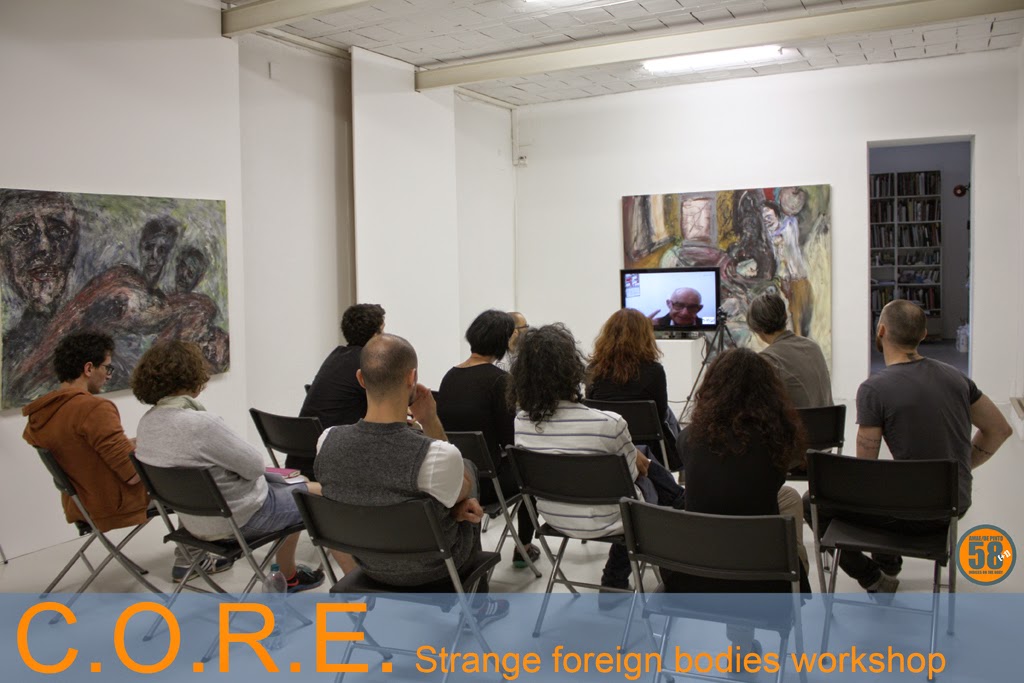 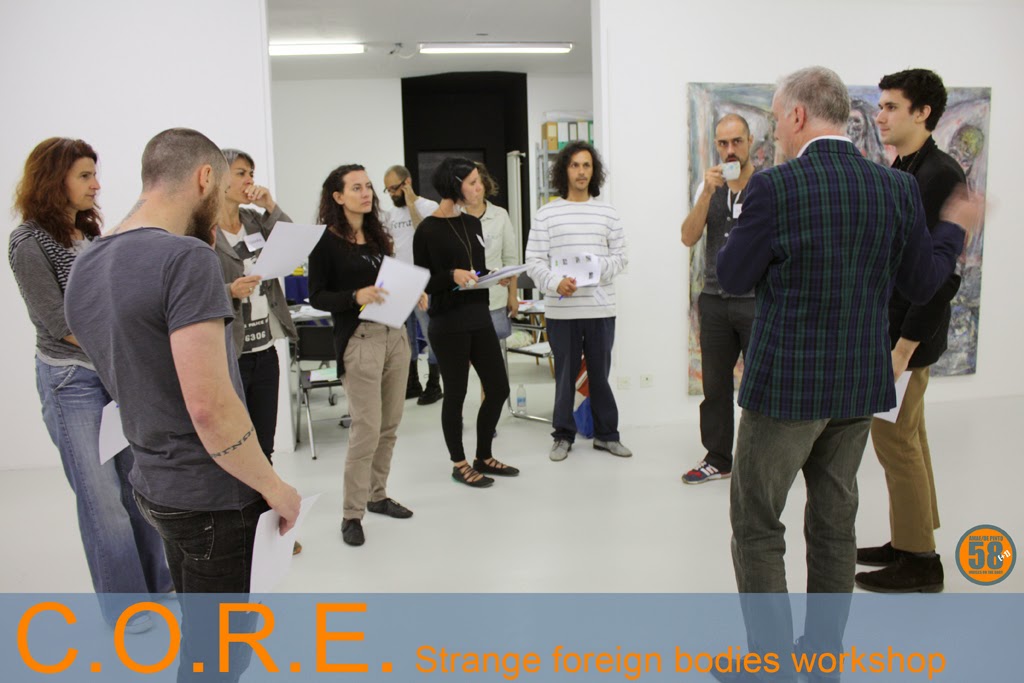 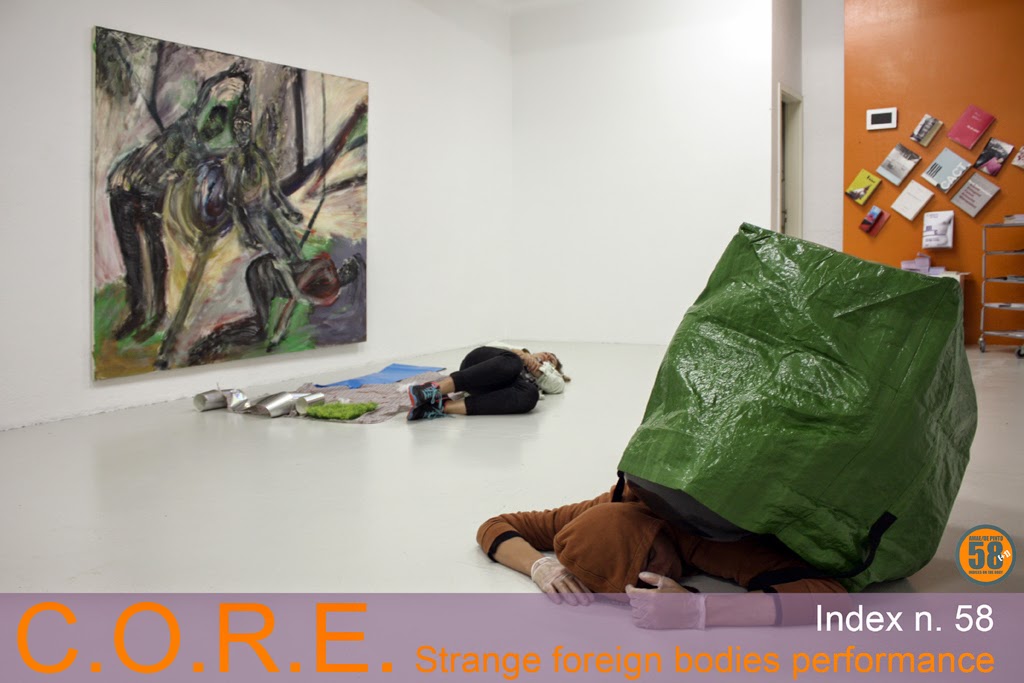 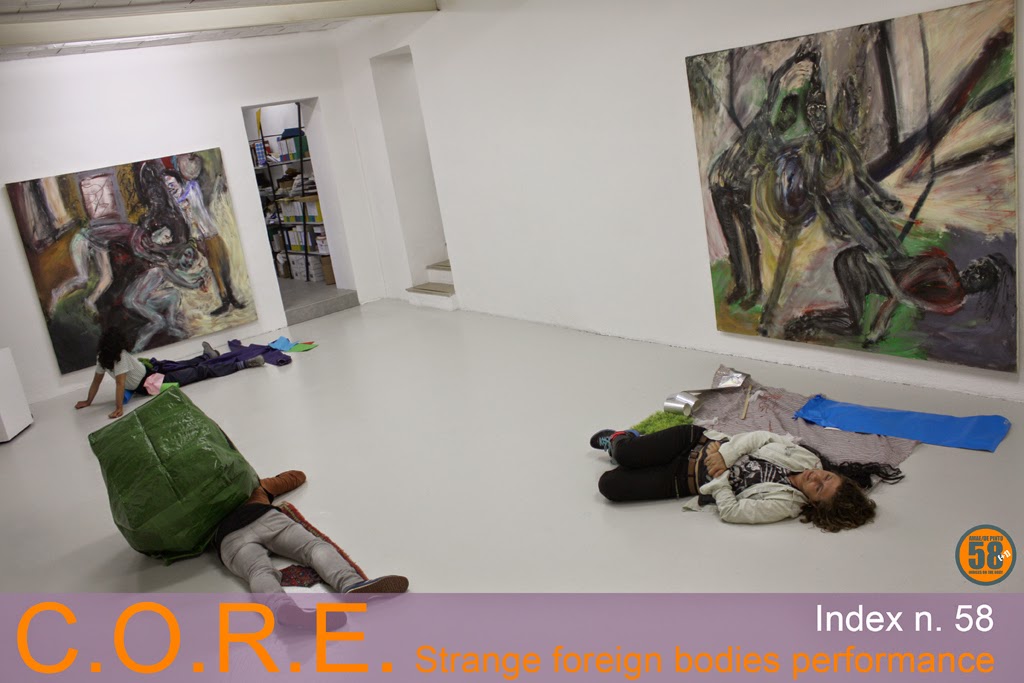 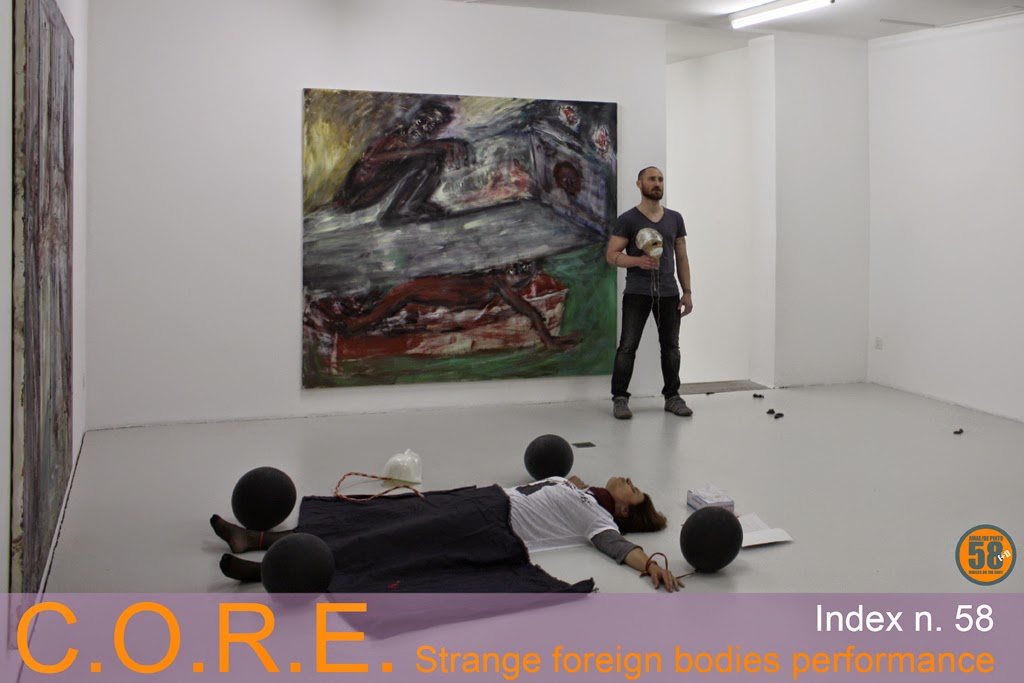 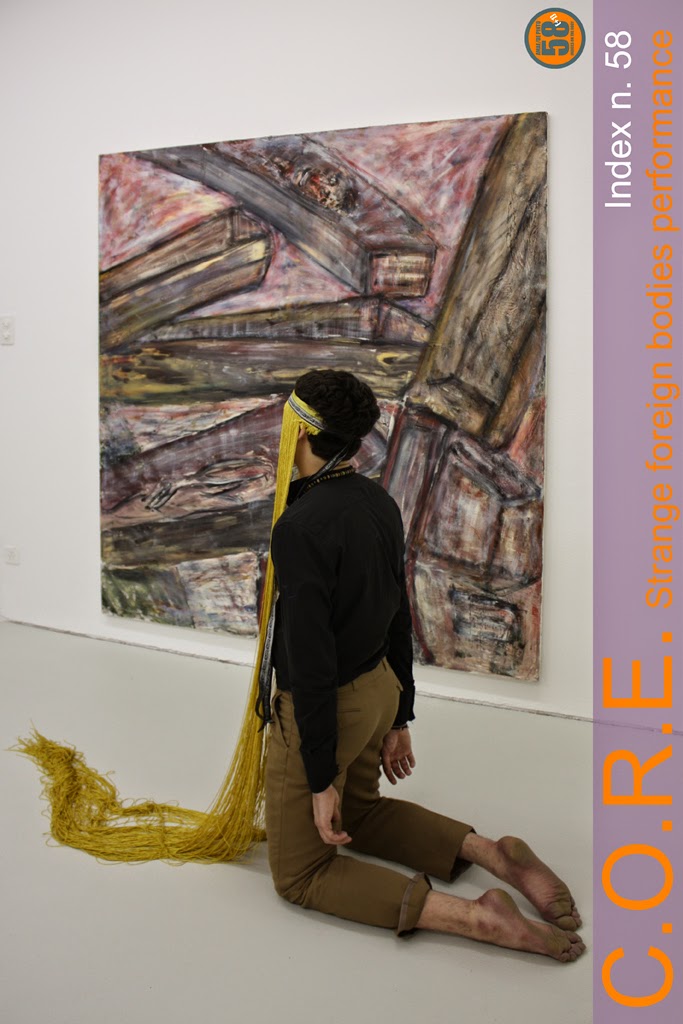 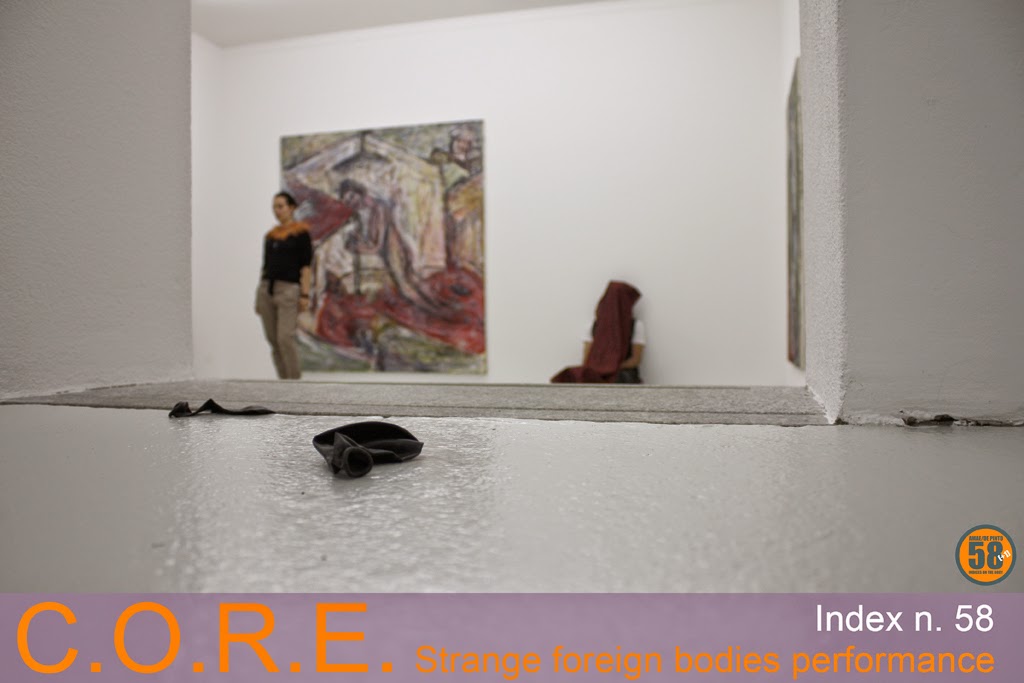 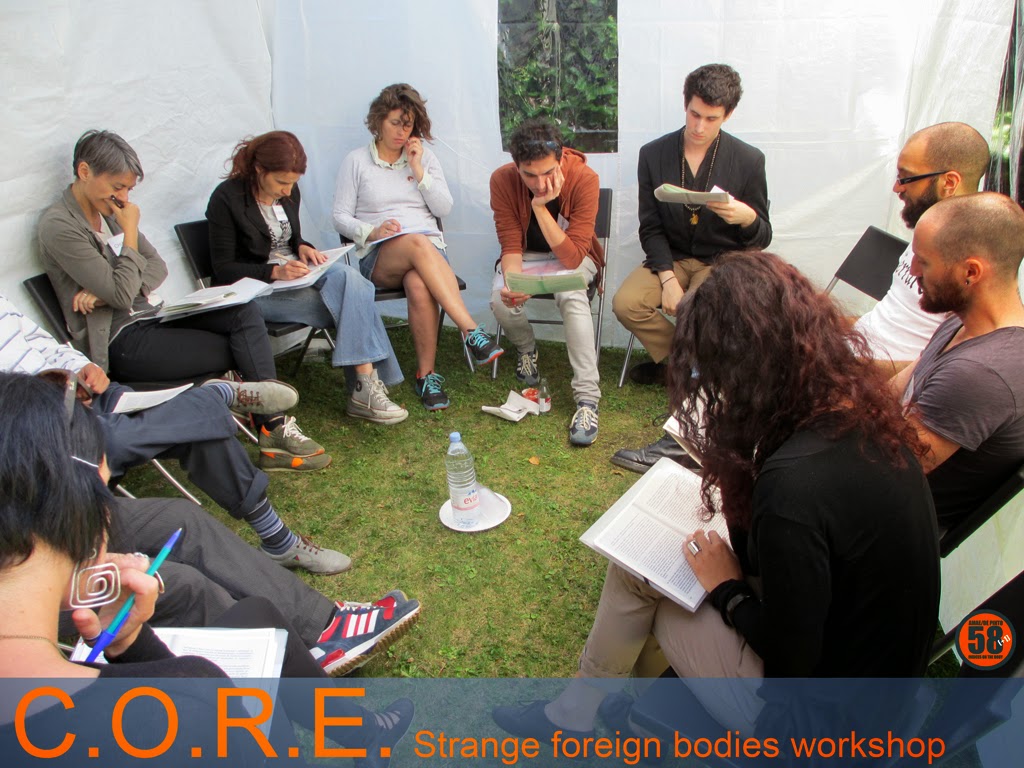 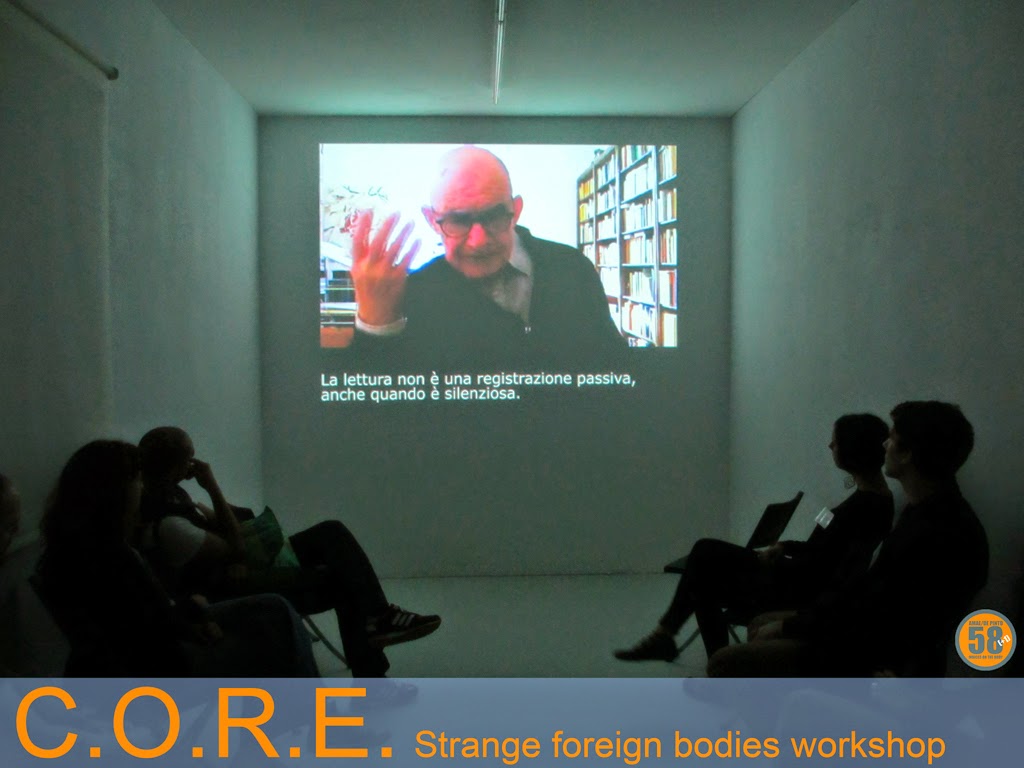 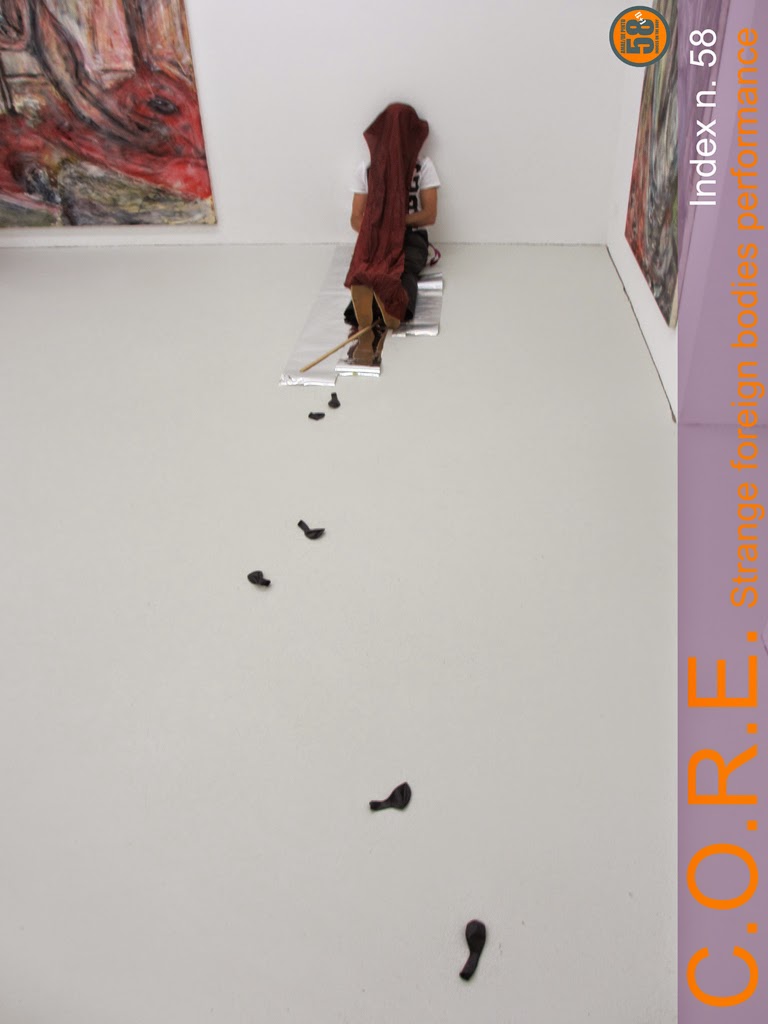 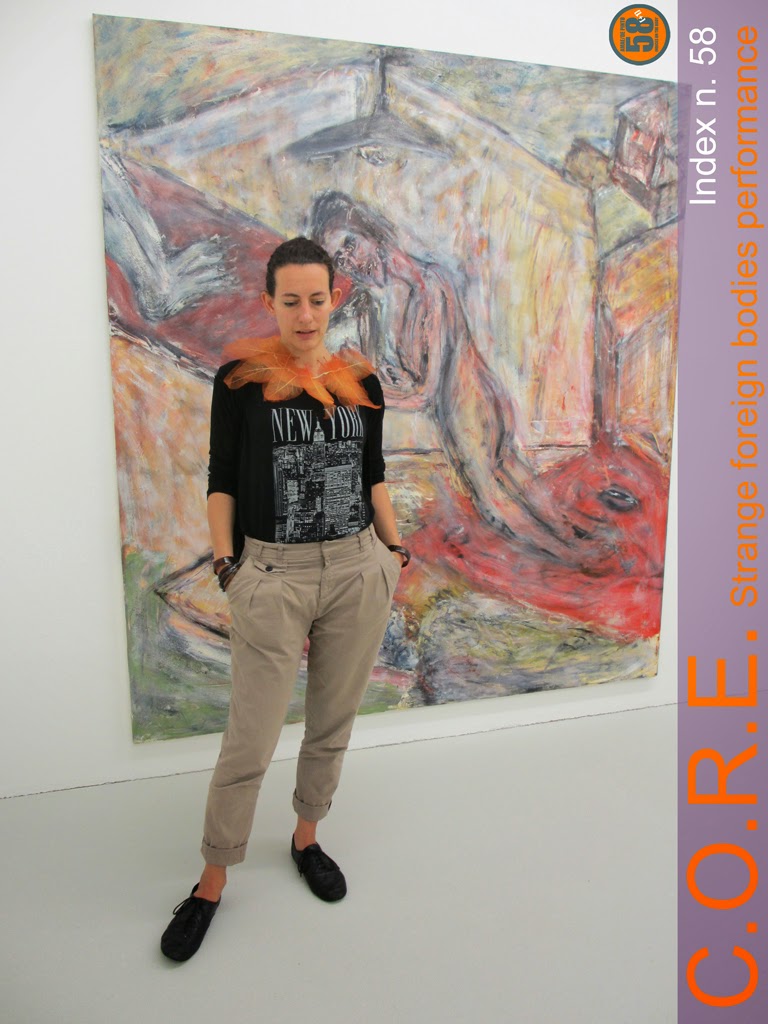